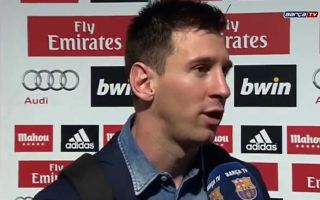 Lionel Messi has taken a controversial dig at former Barcelona teammate Neymar amid his departure to PSG last summer.

Messi has stated that Barcelona are currently a stronger team without Neymar despite the Brazilian currently valued as the most expensive star in the history of world football.

Spanish outlet MARCA have reported comments from the Argentine number ten as Messi explains how Barca are now a stronger team without Neymar amongst their ranks.

Messi stated, “Without Neymar we are more balanced,” adding, “We are currently very well armed in the midfield; this makes us stronger in defence.” (Comments as per MARCA)

While Messi did concede that Barca are arguably weaker in an attacking sense without the Argentine he certainly cast questions over Neymar’s qualities during his time at the Camp Nou by suggesting that the side as a whole is now stronger without him.

Further, it has to be said that Messi’s comments even possess a certain amount of weight to them given Barcelona’s start to the 2017/18 season.

Last year saw Barca fall behind rivals Real Madrid with Madrid winning both the La Liga title and the Champions League. This season, Barcelona now sit on-top of La Liga and are an astonishing 16 points ahead of Real.

Neymar however is certainly sure to have something to say about Messi’s recent comments and the star who transferred from Barca to PSG in the summer for £200m scored twice yesterday during a routine 4-0 PSG win in Ligue 1. (Fee per the BBC)