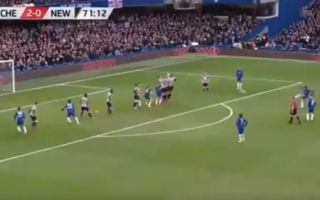 Marcos Alonso scored a fantastic 25-yard free kick against Newcastle today to all but secure Chelsea’s place in the fifth round of the FA Cup.

Belgian Michy Batshuayi put the Blues two goals to the good before the hour mark before Alonso fired home a set piece from just outside the box to put the Blues three goals up.

The strike was Alonso’s seventh goal in all competitions this season, which is already more than the six he managed last campaign for the west London side.

The goal has all but secured the Blues’ place in the fifth round of the FA Cup, a competition that Conte will feel he has a decent chance of winning now Arsenal and Liverpool have been knocked out.