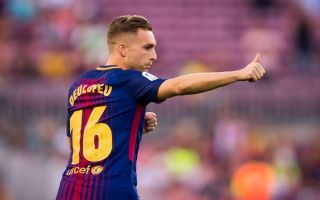 Barcelona winger Gerard Deulofeu is reportedly set to join Watford on loan for the rest of the season after a frustrating return to the Nou Camp.

The 23-year-old displayed some of his best form during a loan spell with AC Milan last year, forcing his way back into the Spain squad as he bagged four goals and three assists in 17 Serie A appearances.

However, he hasn’t been able to kick on from that back with the Catalan giants, as he’s been restricted to a bit-part role and made 17 brief appearances, scoring twice and providing three assists.

With obvious ambitions to be at the World Cup this summer, his lack of playing time due to the competition at Barcelona with the likes of Lionel Messi, Luis Suarez and others has hurt his chances and so another loan exit for the next six months could be his best route to getting back to top form and proving he can deliver at a high level.

According to Sky Sport Italia journalist Gianluca Di Marzio, he’s now set to fly to England in the next day or so ahead of completing a shock move to Watford.

It’s added in the report that the likes of Milan and Napoli were linked with the Spaniard, but instead of a return to Italy he’ll now look to get Watford out of trouble after they sacked Marco Silva earlier this month.

Deulofeu knows the Premier League well after his previous spell with Everton, and given he’s said to be travelling to London on Tuesday, as per Di Marzio, it looks like he’ll have to prove himself at Watford this time to get back to the level that he reached last season.