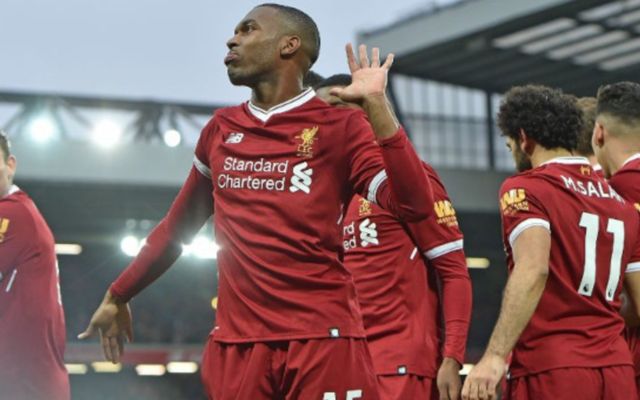 In a bid to secure regular football and perhaps even a spot at the World Cup, Liverpool striker Daniel Sturridge is being tipped to join Newcastle United on loan.

The 28-year-old has struggled to establish himself in Jurgen Klopp’s starting line-up this season, making just 14 appearances in all competitions, scoring three goals and providing three assists.

Injuries have continued to be a problem for the England international, while competition for places from Mohamed Salah, Sadio Mane and Roberto Firmino has proven problematic too.

In turn, as per BBC Merseyside Sport’s tweet below, it’s claimed that he could be on the verge of securing a temporary switch to Newcastle, with a loan fee of £1.5m changing hands while the Magpies will cover his salary entirely.

Daniel Sturridge could well be on his way to @NUFC from @LFC
A loan until the end of the season with a loan fee of £1.5 million and an agreement to pay his salary in full.#LFC #YNWA #bbcfootball #MOTD pic.twitter.com/iaezV8Rsv4

That’s quite the investment on a player who hasn’t played a lot of football this season and has a track record of injury problems, with The Mirror reporting that Sturridge is currently earning £150,000-a-week at Anfield.

The move certainly makes sense for Sturridge, provided that he can stay fit and prove his worth on Tyneside, as he’ll have a better chance of regular playing time and forcing his way into Gareth Southgate’s England plans for the World Cup in Russia this summer.

There is a tinge of disappointment though, as with the Mirror noting how the former Chelsea and Manchester City was linked with a move abroad to join Inter, he’s arguably gone with the safer option of staying in England in his comfort zone.

Nevertheless, it’s crucial for him that he makes the best move for his career, and based on the reports above, it looks as though he could be heading to Newcastle on loan before Wednesday’s transfer deadline.