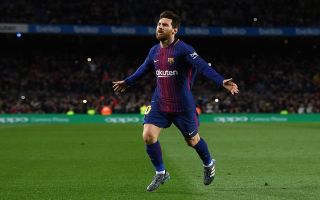 Barcelona were heading for a frustrating 1-1 draw with Alaves on Sunday night, but Lionel Messi had other ideas as he stepped up late on.

The Argentine icon lined up a free-kick in the 84th minute, and duly dispatched it into the back of the net to help seal all three points for Ernesto Valverde’s side.

It restored their 11-point lead at the top of the La Liga table, while the Catalan giants remain unbeaten in the league this season with Luis Suarez equalising for the hosts at the Nou Camp after John Guidetti had given Alaves the lead in the first half.

Having bagged another goal, Messi has taken his tally for the season to 20 in La Liga, ensuring that he has now scored 20 or more goals in each of the last 10 league campaigns.

That is a simply incredible level of consistency, as he has delivered time and time again for Barcelona, especially in big moments such as this one.

As they march on in search of major honours this season, it would come as no surprise if the 30-year-old continued to lead their charge as the supporters below were left to admire his world-class talent once again with his free-kick also included below for your viewing pleasure…

THIS IS MY GOAT. LIONEL ANDRES MESSI ??? pic.twitter.com/OitQUBO858

I have no idea how Messi is better at free-kicks than penalties man. But it’s Messi, nothing makes sense and nothing is logical. You just have to enjoy.

It hurts when people say Ronaldo is better than Messi.

There are no words sometimes for Messi, according to commentator.