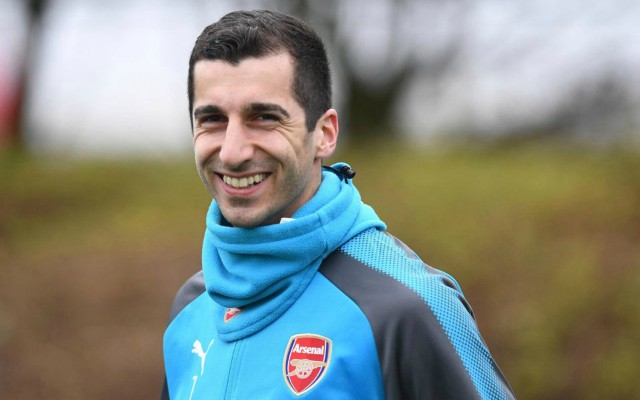 Arsenal fans may not have to wait too much longer for their first look at Henrikh Mkhitaryan in a Gunners shirt, as per Arsene Wenger on Monday.

As noted by BBC Sport, the 29-year-old joined the Gunners in the swap deal that saw Alexis Sanchez move in the opposite direction to Manchester United last week.

In turn, the pressure and responsibility will be on his shoulders to fill that void and provide the creativity and quality in the final third that Wenger will undoubtedly be expecting from him.

According to the Evening Standard, his first opportunity to prove that he’s up for the task will come against Swansea City on Tuesday night, while freelance injury analyst Ben Dinnery notes in his tweet below that Wenger will ultimately make a call on whether he starts or not against the Swans.

Wenger will will make a late call on Mkhitaryan. “I haven’t decided [whether he’ll start], but he’s available like everybody else. I think he can play everywhere in the midfield – certainly not in a defensive role – but all the other positions are not out of reach for him.” #AFC

The Armenian international didn’t enjoy the greatest of spells at Man Utd, as he struggled to display his best form having contributed just 13 goals and 11 assists in 63 appearances for the Red Devils.

Compare that to the 23 goals and staggering 32 assists that he had in 52 appearances in his last campaign for Borussia Dortmund, and it’s obvious that Arsenal will be hoping that he rediscovers the form he displayed in Germany rather than Manchester.

Alongside Mesut Ozil, the pair should be a dream for Alexandre Lacazette given their assist numbers and creative qualities, but now it just remains to be seen whether or not he gets the official nod against Swansea, with the expectation from the reports above being that he will.