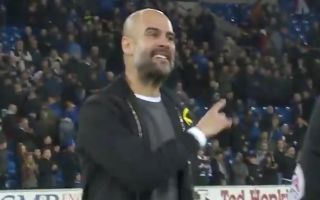 It’s fair to say that Pep Guardiola wasn’t a happy man after Man City’s win over Cardiff City in the FA Cup on Sunday, and in his defence, he has a point.

While there were several contentious issues during the game, the incident that seemingly irked the Spanish tactician in particular was the tackle that forced Leroy Sane off with an injury.

As per BBC Sport, the City boss has pleaded that referees need to do more to protect players in general not just his own, while he also suggested that the German winger could now face a spell of around a month on the sidelines after a dangerous tackle from Joe Bennett resulted in an ankle problem.

Many watching the game and commenting on the video below insisted that they felt sorry for Guardiola as ultimately there were several decisions that went against his side.

However, having already been forced to explain his rant at Nathan Redmond earlier in the season, as per The Guardian, it remains to be seen whether or not the FA look into this matter as an animated Pep is seen angrily explaining a point to referee Lee Mason.

Based on their reaction below, it seems that Man Utd fans don’t expect any action to be taken against Guardiola, and have aimed some cheeky digs at their rivals as they believe that if it were Jose Mourinho in his position, he would have been hit with a touchline ban already.

Whether Guardiola lives to regret this incident remains to be seen, but evidently after being incensed with some of the decisions and tackles flying in on Sunday, he couldn’t control his emotions and that could result in disciplinary action and a further headache for him moving forward…

Pep made his feelings clear at full-time.

Jose will probably get peps ban

Jose would get a ban for that.

No doubt this is classed as passion and he will be excused.

Pep up for a ban for that? Oh no he’s Citeh!

Don’t be silly he’s nothing to do with united ?

If his name was Jose mourinho he’d sent off, finned £50k and banned for 3 matches but because his name is pep his arse is licked and can do what he wants.

Now, the FA will be forming in the mouth, slamming their desks and charging Jose Mourinho first thing tomorrow morning, asking him to explain Guardiola’s comments or risk being slammed with a heavy ban. Christ. What have we done to deserve this? ?