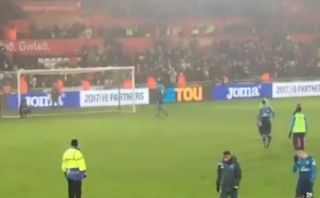 Arsenal striker Olivier Giroud was filmed bidding what appeared to be a final goodbye to the club’s fans after this evening’s 3-1 defeat against Swansea City.

The France international was brought on as a substitute against the Swans but endured a frustrating game if it is to be his final one in an Arsenal shirt.

According to the Telegraph, Giroud is set to join Chelsea for £18million as Arsenal prepare to bring in Borussia Dortmund striker Pierre-Emerick Aubameyang up front.

While it is commonplace for players to go over to the away support after matches, Giroud seemed to make a point of going alone tonight and took an extra moment to wave to the crowd as it looks like he’ll now be heading to Stamford Bridge.

Giroud heads over to the Arsenal fans at full-time – It certainly looked like a goodbye. pic.twitter.com/06KUVQ92BE

Fans won’t be happy to lose a player who’s long been an Emirates Stadium crowd favourite, having earned the reputation for being a reliable super-sub capable of the occasional spectacular goal.