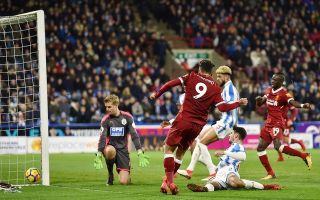 Liverpool coasted to victory at Huddersfield Town on Tuesday night, putting an end to their poor run after disappointing recent defeats.

Goals from Emre Can, Roberto Firmino and Mohamed Salah sealed a 3-0 win for the visitors, and in truth it was a fair reflection of the game as Jurgen Klopp’s side were in control for the most part, dominated possession and took their chances with a clinical edge.

After suffering huge frustration with losses against Swansea City and West Bromwich Albion in their last two games, a reaction was needed from the Merseyside giants to get back on track.

That’s exactly what the travelling supporters got from their team as it was a comfortable victory with Arsenal dropping points making it a double boost in the race to seal a top-four finish.

Can and Firmino get the edge over their teammates in our player ratings and not just because of their goals. Both were influential throughout and played big roles in the win, with Can in particular bouncing back after receiving some criticism for his recent performances.

Arguments can easily be made for others to score higher, but the centre-half pairing of Joel Matip and Dejan Lovren also get a special mention having kept things tight at the back throughout.

As seen below, there were some impressive stats registered by Liverpool in midweek, as they’ve now scored 32 goals away from home in the Premier League this season, moving them clear at the top in that particular category.

Meanwhile, Salah continued his fine form with the Reds as he grabbed his 19th league goal of the season following his summer switch from Roma, and the numbers below show how decisive he has been.

.@LFC have scored the most away goals in @premierleague this season

25 – Mohamed Salah has had a hand in 25 Premier League goals this season, the most of any player in the competition (19 goals, 6 assists). Force.

It came as no surprise to see Liverpool fans delighted with the performance and result, as reflected by their comments below.

It’s been a difficult month in general for the club given they lost Philippe Coutinho to Barcelona and don’t look like filling that void before the transfer deadline on Wednesday night.

Combine that with the recent results as mentioned above, it has led to more pressure. However, they bounced back well and will hope to kick on with the visit of Tottenham to look forward to at the weekend as they hope to avenge their heavy defeat to Spurs at Wembley earlier in the season.

WE KEPT A CLEAN SHEET FFS!!!

Solid performance in what could have been a tricky away fixture well pleased with the 3pts and the clean sheet….???

Brilliant response from the whole team. Get in!