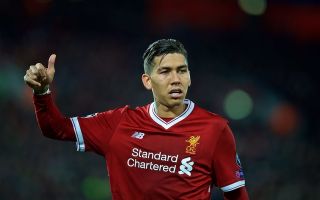 In a transfer window in which Liverpool fans have seen Philippe Coutinho leave Anfield, it’s clear that they don’t want to see Roberto Firmino follow suit.

The 26-year-old has been in fine form this season, scoring 19 goals in 34 games so far in the campaign as he has firmly established himself as a crucial piece in Jurgen Klopp’s plans.

With Daniel Sturridge leaving this week to join West Bromwich Albion on loan for the rest of the season, all eyes will be on the Brazilian international to continue to lead the line and ensure Liverpool achieve their objectives.

He certainly continued that good form with a crucial second goal at Huddersfield on Tuesday night, producing a clever finish at the near post although Jonas Lossl won’t be too impressed with himself when he sees it back as in truth, he should have done better.

The Reds are firmly on course to bounce back from disappointing defeats to Swansea City and West Brom in their last two outings, and these fans are absolutely delighted with Firmino’s continued influence and goals.

With Mohamed Salah and Sadio Mane either side of him, Liverpool will always be a major goalscoring threat, but Firmino’s scoring exploits are going to be absolutely crucial moving forward…

GIVE HIM WHATEVER HE WANTS!! MAKE HIM STAY FOREVER!!!