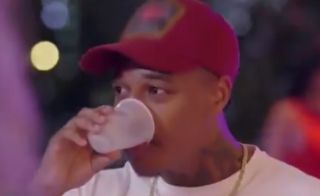 In the space of just 25 seconds in the clip below, the England international was referred to as an ‘international soccer superstar’ – either sarcastically or over-generously, to say the least.

The host also pronounced Clyne’s name wrong before the player was basically barged out of the way by another guest.

The 26-year-old has been out of action for the whole season so far in a big blow to Liverpool, but at least it seems he’s found a way to keep himself busy.

Quite how Clyne appeared on a show like this is not entirely clear, but hopefully he can laugh at himself a bit – because others surely will be.

Away from the hip hop world, Liverpool won 3-0 against Huddersfield Town last night thanks to goals from Emre Can, Roberto Firmino and Mohamed Salah, giving their top four hopes a boost as Arsenal lost to Swansea City on the same night.