It was a good weekend for Arsenal, and BBC pundit Garth Crooks agrees as he has picked three Gunners stars in his Premier League team of the week.

The most obvious choice would have been Aaron Ramsey after his hat-trick against Everton, with the Welshman taking full advantage of the additional creativity around him to get back on the goalscoring trail.

Equally as important though was Henrikh Mkhitaryan, who also gets the nod from Crooks as the January recruit registered three assists in the win and immediately displayed what he can offer this team in the final third.

Debutant Pierre-Emerick Aubameyang is also included in the XI, as aside from scoring in his first appearance for Arsenal with a delightful finish, he was a menace throughout and having only just joined up with his new teammates last week, he’ll likely only get better in the coming weeks and months.

The link-up play between him and former Borussia Dortmund teammate Mkhitaryan was obvious, and while that can only lead to exciting things from Arsenal in an attacking sense, Arsene Wenger still needs to be concerned about his defence as they looked shaky for a period in the second half and have the unwanted title of the joint-worst defensive record of the top eight Premier League sides.

Elsewhere, aside from the magical goal that he scored in the draw with Tottenham, Liverpool’s Mohamed Salah is another deserved inclusion as his double at Anfield on Sunday took his tally to 28 goals in just 34 appearances in all competitions in his first season in England.

The Egyptian wing-wizard has been a revelation at Liverpool this season, and Crooks is more than justified in fielding him in a front three alongside Aubameyang and Brighton’s Jose Izquierdo, who bagged a great goal of his own against West Ham United to secure a crucial win for his side.

Man City duo Ederson and Danilo get the nod too, with the latter scoring one of the goals of the weekend with his stunning long-range effort.

He’s joined by Jack Stephens and Ben Mee of Southampton and Burnley respectively in the back three, after both played crucial roles in keeping things tight at the back and earning their sides important results.

Mario Lemina was also pivotal in the Saints’ win over West Bromwich Albion, while Leicester City’s Fousseni Diabate completes the line-up, as Crooks is tipping him to fill the void left behind by Riyad Mahrez who he envisages will be leaving the club sooner rather than later, as noted in his BBC Sport column.

There can be no criticism or disagreement on some the picks below, as the likes of Ramsey, Salah and Mkhitaryan in particular have earned their spots with decisive displays.

However, there were still reasons to complain for some interested readers, as seen in their tweets below as it wouldn’t be a Crooks team of the week without some criticism… 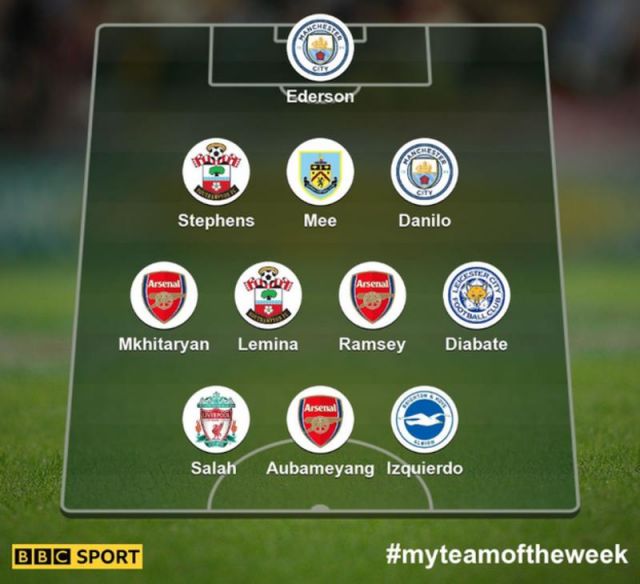 Fair play Garth Crooks is worth his weight in gold…..for entertainment value #nothingelse

Is Garth on crack?

In the name of Analysis, you talk a bit too much Garth. United fans crying to sleep about having the wrong manager?? Didn’t read you say that last season with Pep winning nothing. Keep this up and someone else would be publishing BBC’s team of the week!

The very fact that @Alexis_Sanchez isn’t even on Garth’s lengthy ‘short-list’ of options, nevermind in his chosen XI, confirms the man is clueless.