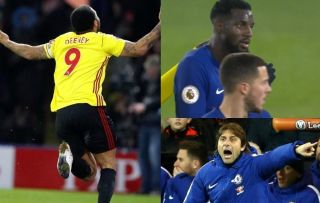 Chelsea are going through a very rough patch currently, but Dennis Wise believes that the players are also to blame for their slump.

Heavy back-to-back defeats against Bournemouth and Watford in the space of a week or so have left the Blues in a precarious situation.

They sit in fourth place in the Premier League table, just a point above Tottenham, with question marks now being raised over their ability to qualify for the Champions League given their recent form.

Speculation has been rife this week that Antonio Conte is at risk of losing his job, as noted by The Daily Mail, but Wise wasn’t ready to stick the knife into the Italian tactician as he diverted attention to the players, as seen in the video below.

Speaking on Sky Sports’ The Debate, Wise, who played over 300 league games for Chelsea in an 11-year stint at Stamford Bridge, was adamant that only N’Golo Kante and Eden Hazard could have come away from the Watford defeat with any sense of playing well.

He criticised others and believes that the problems have been on the pitch with the players not performing, although Conte surely still has to take some responsibility for that as the manager.

It remains to be seen whether or not the former Juventus and Italy boss manages to survive until the end of the season, as he’ll surely need a positive result against West Bromwich Albion on Monday night to lift spirits and ease talk of being sacked.

Wise though seemingly thinks that problems lie elsewhere too, but given Chelsea’s recent history of changing managers and going on to be successful regardless with two Premier League titles in the last three years, perhaps it’s a formula that won’t stop being used in west London.

WATCH: “The problems are the players at @ChelseaFC.”