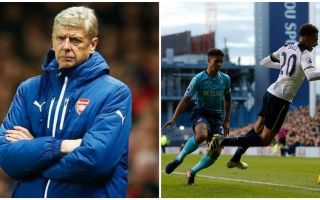 Judging from these comments, it’s fair to say that Arsenal boss Arsene Wenger has been left unimpressed from what he’s seen and heard from Tottenham duo Mauricio Pochettino and Dele Alli.

The talking point came on Sunday in Tottenham’s 2-2 draw with Liverpool, as the England international was booked in the second half for diving, the second time this season he has been cautioned for it.

However, as noted by The Guardian, Pochettino took a defensive tone and didn’t criticise Alli much in his response to the matter, as he suggested that tricking the opponent was a key element of the game.

In turn, Wenger has now reacted after being asked about the situation himself in his press conference on Thursday, and he didn’t think much of Pochettino’s comments it seems as he was confused as to whether or not he was actually excusing his player’s action or not.

Further, the veteran tactician also went on to aim a dig at Alli too as he believes that English players have become quite adept at diving.

“I am convinced he wanted to see tricking your opponent is to be clever. Was it an apology for diving? I’m not sure,” he is quoted as telling the media by The Mirror.

“In my case, no. We want to get diving out of the game. It used to be the foreigners but I must say the English players have learnt very quickly and are maybe the masters now.”

The debate will rage on as many will see Wenger’s side and others will favour Pochettino’s assessment of the talking point. Either way, it stokes the fire ahead of the north London derby this weekend and it remains to be seen how Alli responds in a crucial game for his side and Arsenal as they battle for a top-four finish this season.