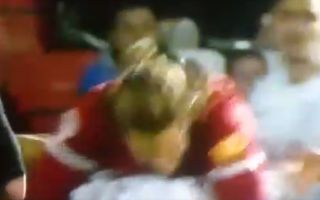 Liverpool manager Jurgen Klopp has admitted he wasn’t impressed with Adam Lallana’s behaviour as the midfielder got himself sent off whilst regaining his fitness in an Under-23s game.

The England international has missed a large chunk of this campaign through injury, and lasted just 60 minutes in a game against Tottenham for getting a Spurs youngster in a chokehold.

Lallana rightly received his marching orders in that game but will not be suspended for Premier League action as Klopp admits he’ll be an option for his squad as they take on the midfielder’s old club Southampton on Sunday.

Still, speaking in his press conference ahead of the game, the German tactician was quoted by the Liverpool Echo’s James Pearce as saying he’s spoken to Lallana about the incident.

Klopp on Lallana red card for u23s: “It’s not nice. I spoke to him, it’s not how it should be. He wasn’t happy about the reaction and I wasn’t either. He’s an option for the squad (on Sunday).” #LFC

‘He wasn’t happy about the reaction and I wasn’t either. He’s an option for the squad (on Sunday).’

Klopp was critical of the 29-year-old, but is seemingly ready to bring him back into the first-team, which is little surprise given his need for a creative player after losing Philippe Coutinho to Barcelona in January.

While Lallana is not strictly the same kind of player, there’s no doubt he adds spark to this Reds side when he does play.