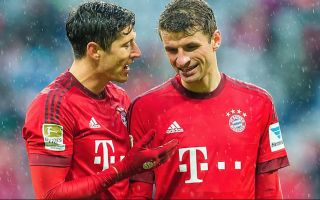 Robert Lewandowski is reportedly looking to push through a dream move from Bayern Munich to Real Madrid.

A report from the Sun has stated that the Polish international eyes Real Madrid as a dream move and that the La Liga Champions would be keen to add the superstar to their ranks.

Lewandowski moved to Bayern from Dortmund in the summer of 2014 for no fee and has since registered nearly 100 goals for the Budesliga giants.

The Bayern striker is likely to have a huge price-tag on his head however with the Daily Star reporting last summer that Premier League side Manchester City were eyeing a move in the region of £64m for the star.

However, it appears the Polish star now wants a new challenge in his career and he could be the perfect star to resurrect Real’s dismal form.

Madrid currently sit 19 points adrift from La Liga leaders Barcelona and it further looks as though Zinedine Zidane’s time at the Spanish capital could be numbered with the Sun reporting that the Frenchman is on the edge of losing his job following a disappointing 2-2 draw with relegation-threateneed side Levante last weekend.

It appears that Real are desperate for an overhaul of their squad and manager in the summer and Lewandowski could certainly be the man to kickstart their revival.