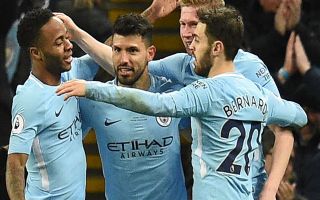 Manchester City had Sergio Aguero to thank this evening, as the Argentine scored four in his side’s 5-1 win over Leicester to help them go 16 points clear at the top of the Premier League.

Sterling opened the scoring in the third minute following a brilliant cross from Kevin De Bruyne, before Jamie Vardy equalised for the away side.

Aguero then bagged his first just after half time, with the former Atletico Madrid ace scoring his second just a few minutes later to put the home side in full control.

The Argentina international then collected his hat-trick in 77th minute, before firing home his fourth in added time to complete the rout for Pep Guardiola’s side.

Following the result, City are now a massive 16 points clear of their rivals Man United at the top of the Premier League.

There’s only one candidate for this one, isn’t there…

Sergio Aguero was on top form this afternoon, as the Argentine became the first place to score four or more goals in a Premier League game on three different occasions.

The Man City forward was on point this evening, as he drew level with Liverpool’s Mohamed Salah in second place in the race for the Premier League Golden Boot.

Masterful finishing from Aguero today. Crazy how he was quietly considered over the hill not long ago.

It wasn’t all about the fantastic Aguero this evening…

Kevin De Bruyne is easily the second best player in the league after Salah.