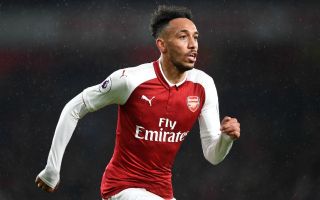 Arsenal fans were sent into a bizarre meltdown after a picture of Pierre-Emerick Aubameyang’s shin-pads were revealed on Instagram.

Eager-eyed Arsenal fans spotted Aubameyang’s questionable choice of shin-pads after a picture of his full-kit in the away dressing room at Wembley had been posted on Arsenal’s official Instagram story.

The forward’s shin-pads had the cartoon character Goku printed on them.

But Aubameyang has DBZ shinpads so I like him and hope he scores 3 hattricks in this match.

Despite a superb start to life in an Arsenal shirt last weekend against Everton, Aubameyang could not carry his fine form into the North London derby this weekend.

The star sealed a £60m deadline day move to Arsenal and Aubameyang scored in a 5-1 win over Everton at the Emirates last week as the Gunners ran riot. Today however, he looked isolated and quiet throughout Arsenal’s clash with Tottenham today. (Fee per the BBC)

Harry Kane’s second-half header on the 49th minute separated the two sides at Wembley today and despite Alexandre Lacazette being granted a glorious opportunity to draw the two sides level on the 93rd minute Arsene Wenger’s side could not salvage a point.