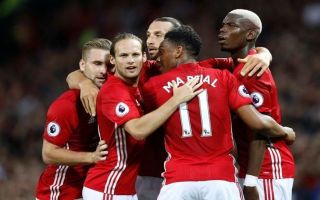 Man United fans took to social media to hammer Red Devils ace Paul Pogba for his performance in his side’s 1-0 defeat to Newcastle this afternoon.

The Magpies scored the only goal of the contest in the 65th minute, after a great strike from Matt Ritchie flew past David De Gea to sink the away side.

Mourinho’s side now sit a huge 16 points behind their fierce rivals Man City in the race for the Premier League title following their loss today.

The Man United boss also extends his run of having never won away to Newcastle, with the Portuguese ace having drawn three and lost four of his seven games away to the Magpies.

After the match, fans took to Twitter to slate the performance of France international Paul Pogba for his performance against Rafa Benitez’s side this afternoon.

Paul Pogba is the biggest fraud in football. The guy is awful

Pogba is awful, worst player that I’ve seen at SJP all season.

Is Pogba playing awful cuz he's no more the face of #MUFC? Since Sanchez arrival his performances have been wack.

Pogba should help himself, he’s been blooming awful.

Yes but Pogba was awful