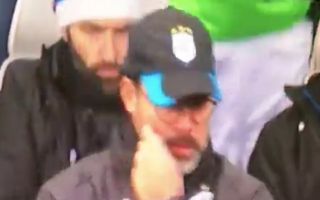 BT Sport had an absolute nightmare on Sunday as they cut to Huddersfield boss David Wagner on the sidelines only to catch some X-rated action in the background.

The hosts defeated Bournemouth 4-1 in a thrilling game as they lifted themselves up to 16th place and two points above the relegation zone in the Premier League table.

However, that’s not the only thing that got everyone talking on Sunday as while the camera panned over to Wagner on the touchline watching on, one of his subs was clearly getting ready in the background only to expose himself to the world as he pulled his shorts up.

The BT Sport commentary team may or may not have spotted it but they did what any professionals would do and completely ignored it. Unfortunately, we all sort it boys and it’s ultimately broken the internet with countless comments from highly amused viewers as a quick Twitter search will undoubtedly take you to it.

Fortunately for the man in question, he hasn’t yet been identified which will spare his blushes for now, but it might be quite the nervous wait as some eagle-eyed supporters or viewers might have an idea. It may well be only a matter of time…

Tell me people see the player on Huddersfield’s bench with his shorts down then. The lot out ????

Just me who clocked a Huddersfield player on bench flashing his cock on telly? ??

Who’s got big piece on bench at Huddersfield???? ?

The producer at BT Sport who cut to a shot of a manager at the Huddersfield game only to catch a player in the background … making a major adjustment to himself … is the unluckiest producer on earth.

Yoooo! One Huddersfield player just exposed himself on live TV. I feel so bad for him! Ugh.

Lmaooo OMG who was that Huddersfield player???

Did anyone else just see one of the subs behind David Wagner flash his private parts when fixing his shorts or have I finally lost the plot? #HUDBOU pic.twitter.com/rYIdnSTu8k

Ladies checking out why Danny Williams is trending #HUDBOU pic.twitter.com/EITylCygeu