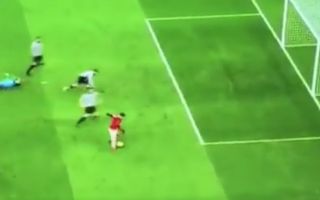 Man United superstar Alexis Sanchez provided a miss of the season contender in his side’s 1-0 loss to Newcastle earlier today.

United lost to Rafa Benitez’s side thanks to a fine strike from Scottish midfielder Matt Ritchie midway through the first half, as Jose Mourinho’s team slumped to their fifth defeat of the league season.

The result now means that United sit a huge 16 points behind their rivals Man City, with their dreams of winning their 14th Premier League title all but over.

During the match, new star Alexis Sanchez, who recently moved from fellow Premier League big guns Arsenal in the January transfer window, had a glorious chance to give the away side the lead, however the Chilean fluffed his lines as United continued to search for the breakthrough.

Here’s a clip of the horrendous miss from Sanchez, it’s definitely a contender for miss of the season in our view!

Man did a fake shot with an open goal #afcpic.twitter.com/jzHLibaXx7