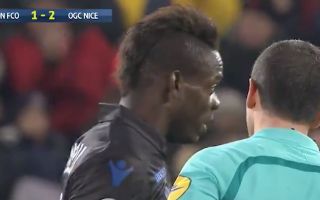 Mario Balotelli was shown a yellow card for protesting racial abuse during Nice’s 3-2 away defat to Dijon yesterday.

After missing a chance on the 72nd minute Balotelli received a flurry of abuse from home fans and then proceeded to protest the treatment to the referee.

The Sun have reported comments from Nice in which they stated that Balotelli was purely shown a yellow card for just protesting the racial abuse.

You can watch video below in which Balotelli is presented a yellow card for his protests.

Unbelievable! Mario Balotelli gets booked for complaining about racist abuse…

What is the referee playing at? ? pic.twitter.com/jAnmGEodgO

Balotelli is of-course a high-profile star who has played for some of the biggest clubs in Europe including both AC Milan and Inter Milan alongside Premier League giants Manchester City and Liverpool.

While Balotelli is often viewed as a controversial figure for his behaviour, almost everyone will have to agree that the star was unfairly treated.

Understandably football fans across the globe were furious with the treatment that Balotelli received.

Mario Balotelli gets a yellow card for asking the official to do something about monkey chanting? That’s fucking disgraceful. https://t.co/HJc8nbD3YW

Balotelli complained to the referee after being racially abused by rival fans and got booked, disgraceful.

IF Mario Balotelli was genuinely booked for complaining about racist chants, he should have walked off the pitch, and the referee should be fired immediately. Embarrassment.