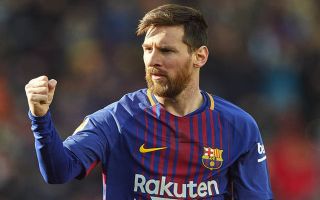 Barcelona and Argentina superstar Lionel Messi has stated that the Spanish giants have “improved in defence” following the departure of Brazilian sensation Neymar.

This is according to the Mirror, who are reporting that the Argentine ace has said that the Blaugrana have become a better team defensively following Neymar’s summer transfer to PSG, and that Ernesto Valverde’s side are “more balanced” without the winger in their side.

Speaking about Neymar and the way Barcelona are playing without the Brazilian, Messi said that “Without Neymar we are more balanced. His departure led to a change in the way we play.

Messi then also went to add “we have lost a lot of our offensive potential but we have improved in defence. We have more balance and this allows us to be more solid.”

So far this season, it certainly doesn’t seem as if Barcelona are missing the Brazilian, as the former Spanish champions are currently unbeaten in both the league and Champions League so far.

Valverde’s side have been in terrific form so far this season, winning 18 and drawing four of their 22 league matches, a record that sees them sit six points clear of second placed Atletico Madrid, and 16 points clear of fierce rivals Real Madrid.

Messi himself has been in devastating form, with the five-time Ballon D’Or winner scoring 27 goals and bagging 14 assists in 35 appearances in all competitions.

Defensively, Barcelona have certainly gotten a lot stronger under Valverde, as so far this season, the Spanish giants have only conceded 11 league goals, with only Atletico Madrid being able to boast a better defensive league record.

Ernesto Valverde’s decision to mainly play a 4-4-2 formation this campaign has certainly contributed to this, as by using either Andre Gomes, Paulinho or Andreas Iniesta as wide midfielders, it has allowed Barca’s defence more cover, and has allowed their fullbacks to attack at will.

Following Messi’s words, it’ll be interesting to see if Barca can keep up their unbeatable form that they’ve been on so far this season.