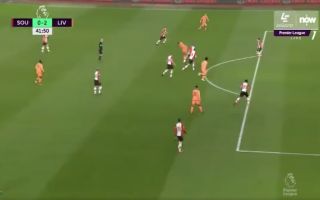 Liverpool took home a comfortable three points this afternoon after beating Southampton 2-0 thanks to goals from Mohamed Salah and Roberto Firmino.

Virgil van Dijk made his first return to his former club since his January switch to Liverpool and looked unfazed despite being booed throughout by the home fans.

It was the Brazilian Firmino however who stole the show for Jurgen Klopp’s men during today’s victory.

Firmino opened the scoring on the 6th minute after some questionable defending from Southampton and then turned provider on the 42nd with an audacious piece of skill.

The Brazilian produced an outstanding back-heel to play through team-mate Mohamed Salah to score his 22nd Premier League goal of the season.

Firmino himself now has 20 goals in a single season for the first-time since signing for Liverpool.

Firmino now has 6 assists for the season in the Premier League alongside his 12 goals.

Liverpool fans took to social media to heap praise upon their Brazilian forward, while speculating how much he could now be worth in the current market.

Firmino’s backheel is NSFW. Mo’s smile when hugging him could cure leprosy pic.twitter.com/lslNNKZ3Xx

Firmino deserves 2 assists chalked down for that one. Unbelievable skill.

Salah got man of the match? Further proof that Roberto Firmino is criminally underrated, still. Was outstanding today.

If Coutinho went for 140m