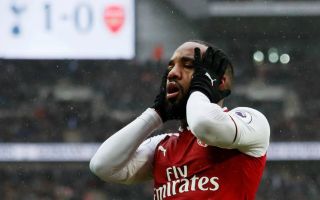 Arsenal manager Arsene Wenger has bizarrely kicked Alexandre Lacazette while he’s down when analysing his bad miss in the North London Derby defeat to Tottenham.

The France international, a summer signing from Lyon, did not show his usual composure in front of goal as he steered a shot wide from a great position late on in the 1-0 defeat at Spurs on Saturday.

Lacazette arrived at Arsenal last summer with the reputation for being an ice-cool finisher, but has not looked himself for much of his time in north London, especially recently.

With just one goal in his last 13 games in all competitions, it’s little surprise that Wenger did swoop to bring in a new striker in January, signing Pierre-Emerick Aubameyang from Borussia Dortmund.

The Gabon international may not have had the best time against Tottenham either, but Wenger aimed a slight dig at Lacazette over his miss, suggesting it was down to a lack of confidence following the arrival of a rival centre-forward.

‘For him, one against one with the keeper, he is a good goalscorer,’ Wenger is quoted in the Independent.

‘He has gone through difficult periods before. He works hard in training, works on his finishing. I don’t know what happened, did he not touch the ball well? It can happen, it is a fraction of a second.

‘Maybe the confidence is not at its highest because he has seen a competitor coming in for him.’

Quite what the French tactician thought the benefit of pointing this out was is unclear, as it surely just serves to remind the 26-year-old even more that his place is under threat.