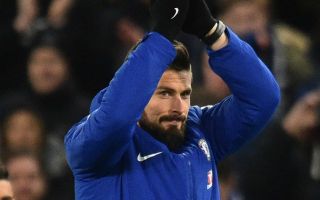 Chelsea face West Bromwich Albion at Stamford Bridge on Monday night hoping to end a poor run of form which has seen them lose their last two Premier League games.

The Blues have suffered defeats to Bournemouth and Watford in their last two outings, conceding seven goals and scoring just one.

In turn, the pressure is on Antonio Conte and his players to turn things around quickly by providing a reaction on Monday against the Baggies, and it seems as though the Italian tactician has delighted supporters with two key decisions.

Olivier Giroud gets the start up front and will be supported by Pedro and Eden Hazard, with the Frenchman’s inclusion undoubtedly getting a positive reaction from fans on Twitter, as seen below.

Further, the decision to leave Gary Cahill on the bench has seemingly also gone down well with the Chelsea faithful, as evidently they haven’t been impressed with him this season.

Pleasing the fans is one thing though, the important aspect on Monday night is to get three points and get back on track in their bid to secure a top-four finish in the Premier League this season. In contrast, another defeat could lead to more difficult questions after the game.

Yes Giroud and Christensen start, hopefully the team feel refreshed after that long 3 day break
Please let’s get the win in! Come on Chels!!

At last no Cahill in the team

Finally Giroud what a time to be alive. A striker!

NO CAHILL WE EATIN GOOD TONIGHT

Giroud start, no more false 9. Morata on the bench, that means he’s now fit. You guys are condemned to win this game. No excuse. #CHEWBA #CFC
Come on you Blues! #KTBFFH

very pleased with this line up buzzing to see giroud starting buzzing to see alvaro back in the squad too let’s get the 3 points we need a response come on you blues ???? #CFC #KTBFFH