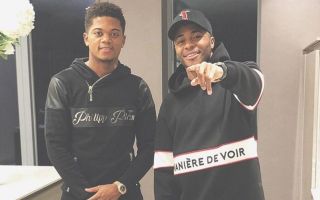 Raheem Sterling has got Manchester City fans rather excited after hanging out with Bayer Leverkusen winger Leon Bailey amid plenty of transfer speculation over his future.

The young Jamaican has lit up the Bundesliga with some exciting performances this season, and was most recently linked with Liverpool and valued at around £100million by the Daily Mirror.

Sterling, formerly of Liverpool, may now be teasing at ruining his old club’s transfer plans, with fans certainly keen for him to persuade Bailey to join City instead after tweeting a picture of himself and the 20-year-old hanging out.

Get him to city pal

does this mean what I think it means? pic.twitter.com/PumMyoL7cu

plz bring him to city

Kicker have also linked Bailey as a transfer target for Arsenal, and they could certainly do with an attacking player of his quality after losing Alexis Sanchez to Manchester United in January.

Leon Bailey is a rumoured transfer target for Liverpool, Chelsea and Arsenal

Meanwhile, the Sun also claimed Chelsea and Barcelona could do battle over the youngster’s signature, but there’s no doubt City would be an attractive proposition for any top attacking player right now.

Pep Guardiola’s side are running away with the Premier League, enjoying a 16-point lead at the top of the table and playing a stylish brand of attacking football that could also see them become genuine contenders to complete a quadruple this season.