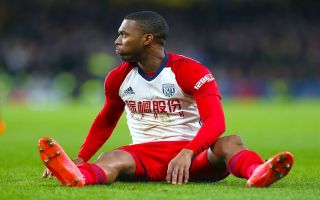 Liverpool shipped Daniel Sturridge out on loan last month to join West Bromwich Albion, but it hasn’t changed his luck with injuries.

The 28-year-old has been blighted by fitness problems in recent years, as he has failed to make 30 or more appearances in all competitions in a single season since the 2013/14 campaign.

Unfortunately for him, he lasted just three minutes in Chelsea’s clash with the Baggies at Stamford Bridge on Monday night, as he was forced to limp off with a suspected hamstring injury after his first touch of the ball.

Naturally, his decision to leave Anfield for the next few months would have been with a view of gaining regular first-team football and making a late push for a place in the England squad for the World Cup in Russia this summer.

Now his focus will yet again be on recovering from an injury as it remains to be seen how long it could keep him sidelined for as he cut a dejected and frustrated figure having headed straight down the tunnel.

It’s fair to say that the Liverpool fans below weren’t particularly surprised, with some adamant that Jurgen Klopp made the right decision to let him leave as they raised serious doubts over his ability to have a future at the club beyond this season when his loan spell ends.

He is finished. Hamstring after kicking a ball. Klopp got it right again.

Got to feel sorry for the lad . But Fook me we’ll never get rid of him . Mans got weetabix legs

sturridge should just retire. The game of football is no more for him…

I hope they don’t try and send sick note back ???

Think he should retire meself now his body has totally given up !!! Without sounding like an ass!!

A shame, a pity. Good player made of plastic. Summer Klopp will surely sell outright but who would Wana buy.

Sturridge earns £540,000 a month at Liverpool let that sink in

that’s very sad. what a waste of talent 🙁