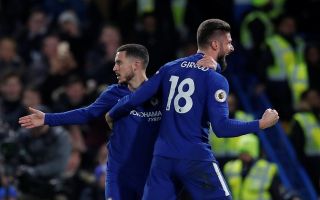 Chelsea ace Eden Hazard will take most of the plaudits from the clash with West Bromwich Albion, but Olivier Giroud also earned plenty of praise too.

The Frenchman was handed his first start since his January move from Arsenal, and he made a telling impact in the first half against the Baggies at Stamford Bridge.

While Antonio Conte will hope to see him use his physicality and technical quality to hold up the ball and link play up while also bagging goals himself, Giroud was the provider on this occasion as his deft flick allowed Hazard to break free in front of goal to put Chelsea ahead.

It didn’t go unnoticed by Chelsea supporters, as seen in the tweets below, as they were full of praise for their latest recruit as they’ll certainly be hoping that he can play an integral role for the side moving forward.

Alvaro Morata has struggled with form and injury in recent weeks, and so Giroud will have a crucial role to play to ensure that Conte’s men have overcome their blip after back-to-back losses to Bournemouth and Watford.

Having shown an ability to link up with Hazard, Giroud will undoubtedly be hoping to strike up a real understanding with the Belgian international to keep his place in the starting line-up while also looking to get on the scoresheet sooner rather than later as well.

Giroud’s link up play is out of this world

I hope morata is watching can’t he see what giroud is going.

That is top quality link-up play between Hazard and Giroud! ??

Hazard and Giroud are going to do that A LOT. Both so good at those little intricate flicks around the box. Class ? #CHEWBA

giroud with the assist! ?

Oliver giroud is the man

Giroud is the man.