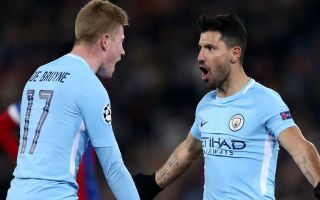 Man City took a big step towards qualifying for the quarter finals of the Champions League this evening, as Pep Guardiola’s side hammered Swiss side FC Basel.

The away side opened the scoring in the 14th minute, after a cross from Kevin De Bruyne was powered home by Ilkay Gundogan to give the Premier League leaders an early lead.

City then doubled their lead just four minutes thanks to a fantastic executed volley from Bernardo Silva, with Aguero then adding a third midway through the first half as with the Argentine hammered home a 25-yard strike to all but wrap up the win for the away side.

Guardiola’s men then added a fourth just after half time, as Gundogan secured his brace with a fine curling effort from the edge of the box.

Aguero’s strike now means that he’s got five goals in hist last two appearances, as the Argentine continue his impressive form in 2018.

German midfielder Ilkay Gundogan was on top form this evening, as the former Borussia Dortmund ace bagged a fantastic brace to help his side thump Basel.

The 27-year-old took both his goals brilliantly, with the second being one of pure class as City claimed an almost unassailable first leg lead.

This tweet sums up the player’s performance down to a T.

It seems the ‘Pep Effect’ is in full swing….

34 – Manchester City have already won more games this season in all competitions (34) than they did in the whole of last season (33). Exceptional. #UCL #BSLMCI pic.twitter.com/UJhZwns81G

Bernardo silva sending players into retirement with some touches tonight. What a player ??

Bernardo Silva is a different animal in Europe ??

Amazing. Every single player deserves man of the match but for me it has to be bernardo silva without a doubt.