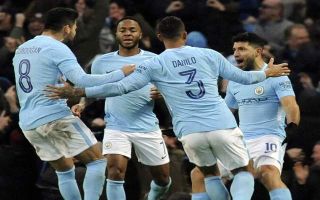 Man City fans are absolutely over the moon with Sergio Aguero following the Argentine’s first half display in his side’s demolition of Basel in the Champions League.

The away side opened the scoring through a fine header from German international Ilkay Gundogan, with their lead then being doubled just minutes later following a fine volley from midfielder Bernardo Silva.

Aguero then found his fourth goal in just one and a half games for Pep Guardiola’s side, as the former Atletico Madrid forward powered home a strike from 25-yards to put the Premier League giants out of sight with just 23 minutes gone.

It was Aguero’s fourth consecutive away goal in the competition, as he continues his blistering start to 2018.

During the first half, fans took to Twitter to laud the striker for his performance in City’s first half against the Swiss side.

Here are a few select tweets praising the Argentinian international for his performance so far in the match.

Sergio Aguero back to his brilliant best, What a player.

Aguero is class got to admit