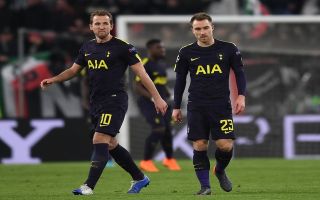 Juventus surrendered a two-goal lead against Tottenham in their Champions League last-16 first leg tie in Turin on Tuesday night, although the visitors deserve plenty of credit as they fought back in a 2-2 draw.

Gonzalo Higuain’s double in the opening eight minutes of the game put the Serie A champions in a strong position, but Harry Kane bagged a crucial away goal in the first half.

The Bianconeri were left to rue what could turn out to be a decisive moment in the tie when Higuain struck the crossbar with his second penalty of the game, before Christian Eriksen’s free-kick after the interval ensured that his side hold the away goal advantage heading into the second leg at Wembley next month.

Mauricio Pochettino will be delighted with many key individuals who put in crucial performances, but Eriksen stood out in particular as he pulled the strings in midfield and got an important goal to get our Man of the Match award.

Despite his penalty miss, Higuain is the pick of the bunch for the hosts as his first goal was a brilliant strike, and he was key in the game for Juve.

It was a brilliant result for Tottenham when considering some of the statistics below, as Juve have again proven to be a resolute defensive unit this season.

Kane’s goal was the first that they’ve conceded at home since November, while there was another impressive landmark for the England international as he continues to find the back of the net with great regularity this year.

That’s now 33 this season for the Tottenham forward, while as noted below, he’s got more goals in his first nine Champions League games than the likes of Ronaldinho and Didier Drogba.

Harry Kane is the first player to score past Juventus in Turin since Benevento’s Amato Ciciretti, exactly 100 days ago on November 5th pic.twitter.com/MSTa6Mz5mS

9 – Harry Kane has scored more goals in his first nine Champions League appearances (9) than any player in the history of the competition, ahead of Ronaldinho, Simone Inzaghi, Didier Drogba & Diego Costa (8). Greatest. #JUVTOT #UCL pic.twitter.com/b7RCpdRrwn

Naturally, Tottenham fans were delighted with the performance and result, as they were ultimately in the ascendency for large periods and looked a real threat.

In contrast, Juve were perhaps a little too deep and passive which isn’t like them based on their style of play in Serie A.

Nevertheless, that’s now two away goals for Tottenham to take back to Wembley, and it remains to be seen whether or not they can advance in what promises to be another intriguing battle next month.

Nothing but immense pride from tonight’s performance. The maturity shown after that opening 10 minutes was incredible. COYS ?

What a result and what a couple weeks this team has had. The mentality to come back after 2 goals down against that team is incredible. So proud of them #coys

Eriksen,Lamela & Dembele were immense! Really proud of that team performance

4 MASSIVE games and we passed with flying colours

This is Spurs team capable of anything on their day

Fantastic result and tremendous character shown! So proud of this team! I’ve never seen this Juventus side be dominated as much as they were tonight!! #COYS ???