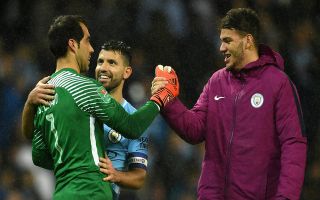 Man City are eager to tie down Brazilian shot-stopper Ederson to a new deal with the club despite him only securing a move to England in the summer just gone.

This is according to the Sun, who are reporting that the former Benfica star is currently on £70,000-a-week with Pep Guardiola’s side, and that the player has been fantastic for the club since his move over the summer, and that they want to reward the Brazilian with a new deal.

The news outlet are also reporting that the Premier League leaders are eager to tie the player down to a new contract with them, and that a club source had stated that “The club is already looking at giving Ederson a new deal at the club. He was an expensive purchase but has been worth every penny. He has delighted Pep how quickly he’s settled in.”

Since joining the club from Benfica in the summer, Ederson has proven to be somewhat of a bargain, with the Brazilian showing his class time and time again for the Citizens.

In 27 appearances in the league for Guardiola’s side, the ‘keeper has been able to amass a total of 12 clean sheets, an impressive feat considering this is the player’s first season in England.

One area of Ederson’s game that has been lauded is his distribution, with some fans even jokingly claiming that his passing is so good that he player can be deployed in midfield!

Ederson has only managed to concede 20 league goals in 27 games this season, and at just the young age of 24, it seems as if City will have a fantastic shot-stopper on their hands for the long term should Ederson agree a new deal with the club.

If City are keen on keeping their already strong defence in tact for the long term, then tying Ederson down to a new deal wouldn’t be the worst way to start!