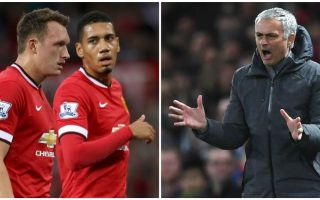 Man Utd are reportedly keeping tabs on Tottenham defender Toby Alderweireld, and that could be more bad news for Chris Smalling and Phil Jones.

As reported by The Mirror, the pair have come under fire over the past fortnight and have now been linked with being axed by Jose Mourinho in the summer.

The Red Devils have slipped to back-to-back away defeats in the Premier League with the pair at the heart of the defence, and although they still boast the best defensive record in the top flight having conceded just 19 goals in 27 games, the report above would suggest that the Man Utd boss isn’t entirely content with his current options.

As per the Manchester Evening News, it could get worse for them as United could look to swoop for Alderweireld amid ongoing uncertainty over his future at Tottenham.

It’s claimed that the Belgian international has less than 18 months remaining on his contract, and he could be available for just £25m ahead of the 2019 summer transfer window, as per a release clause in his deal.

Much will depend on whether or not the 28-year-old signs a new deal before then, but there is no denying that he has established himself as one of the top defenders in England since his arrival in 2014.

After a brief stint at Southampton, he’s gone on to make 109 appearances for Spurs, cementing his place as a key figure in Mauricio Pochettino’s side’s progress over the last two seasons.

They could soon face the risk of losing him though unless they can agree on new terms to perhaps even rid themselves of that potentially troublesome £25m release clause and get Alderweireld to commit his long-term future.

Meanwhile, it’s also questionable as to whether Man Utd really need another central defender. With Eric Bailly, Victor Lindelof and Marcos Rojo at Mourinho’s disposal, he has options. Nevertheless, if the The Mirror’s claim that Jones and Smalling may be on their way out, then that could potentially lead to a stronger argument to swoop for Alderweireld.