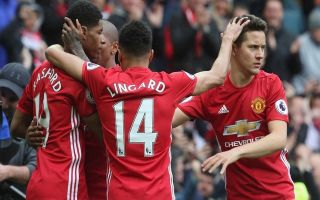 Man Utd face a trip to Huddersfield on Saturday in the FA Cup, and if Jose Mourinho had hopes of rotating his squad, he may have suffered a setback.

The Red Devils are 16 points adrift of rivals Man City in the Premier League title race, while there is a long way to go in the Champions League to raise real confidence of going all the way just yet.

In turn, the FA Cup is arguably their best shot at silverware this season, but they’ll have to try and advance with Ander Herrera joining Marcus Rashford on the sidelines, as per The Sun, who claim he could be sidelined for weeks with a thigh problem.

The Spaniard was key in the 4-0 win over Yeovil Town in the last round having scored and also played an influential role in the victory, and similarly, he could have been expected to secure a starting role at Huddersfield with the likes of Paul Pogba or Nemanja Matic in line to be rested.

Instead, he’ll now have to focus on recovering and rue a potential missed opportunity to force his way into Mourinho’s plans at the business end of the season.

The 28-year-old has struggled for a regular place in the Premier League line-up in particular this year, and with The Mirror noting that AC Milan are interested in prising him away from Old Trafford, he might not get many more opportunities to prove his worth to Mourinho and secure his long-term future at Man Utd.

PSG stars publicly complain that the ref told them to “f*ck off” vs Man City and demand action May 5 2021, 12:25
Manchester City

Video: Irony as Man United midfielder Fred is sent off for the one challenge of the night that wasn’t that bad vs PSG Dec 2 2020, 21:45
Manchester United FC