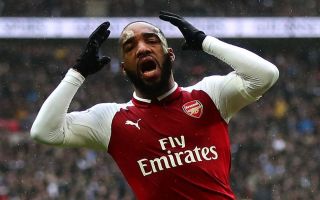 Arsenal have been handed a major dilemma after it was confirmed that striker Alexandre Lacazette has been ruled out for six weeks with a knee injury.

As per BBC Sport, the Gunners star underwent knee surgery on Tuesday, and so now Arsene Wenger will be without his services for a key run at the business end of the season.

On first glance, it shouldn’t be as big a problem as it perhaps could have been prior to the January transfer window, as Arsenal now have Pierre-Emerick Aubameyang to lead their line after his arrival from Borussia Dortmund.

However, the problem is that the Gabon international in ineligible in the Europa League having featured for Dortmund in Europe already this season and was included in their squad for the same competition before he secured his move to north London, and so that will leave Wenger with a real selection headache to deal with.

Naturally, it’s a blow for Arsenal, but some of their fans at least have seen the funny side of it and joked that Danny Welbeck will be the man to step up and deliver to rescue their hopes of winning the Europa League and securing a place in the Champions League next season in the process.

Given he’s only scored five goals in 23 appearances so far this season, it’s fair to say that there is a sarcastic tone to the comments below.

Some have even suggested Nacho Monreal could be a solution given the defender has scored four goals this season, but time will tell what option Wenger goes with to ensure that they remain in the hunt for silverware.

Only one man can save us now pic.twitter.com/ichlDZ5Xx0

Welbeck and Nketia to bring the Europa league home ??. Tears in my eyes

Take a screenshot @Arsenal if Welbeck scored a hat trick against Ostersunds I will buy the away shirt with his name at the back and I will wear it every game day until the end of the season. Word. #EuropaLeague

Hahahaha you think Wenger has the balls to play him? This man will be sprinkling it all over your angry tweets come Thursday pic.twitter.com/cyWej6twqT

Loooool you wish! Wenger will go and play Welbeck