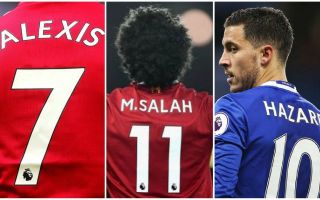 It’s always intriguing to see who tops the shirt sales in the Premier League, with Man Utd, Liverpool and Chelsea stars all involved in the battle.

As reported by The Sun, Sports Direct have released their figures to start 2018, and it seems a January move to Old Trafford has seemingly done wonders for Alexis Sanchez’s popularity.

According to their data, the Chilean international boasts the best-selling jersey since January 1, and he’s got familiar company at the top with Man Utd teammate Paul Pogba in second place.

From that point onwards though there’s a good mix amongst the other top sides with Harry Kane, Mohamed Salah and Eden Hazard showing that they’ve still got plenty of fans of their own to complete the top five.

Arsenal have to wait until No.8 to get a representative with Mesut Ozil, while given Pierre-Emerick Aubameyang joined on deadline day, he’ll obviously have some catching up to do but these standings could look different at the end of this month.

Kevin De Bruyne, Roberto Firmino, Zlatan Ibrahimovic and Dele Alli are just some of the other names to make the top 20, which can be seen in full below. However, it’s Sanchez who sits top even though United are currently struggling on the pitch with rivals City on course to win the title.