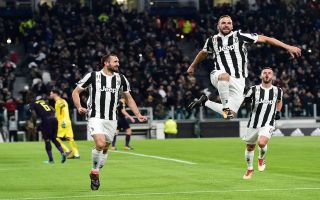 The Champions League returned with a bang on Tuesday with Gonzalo Higuain and Sergio Aguero scoring the goals of the night.

There was a thriller in Turin between Juventus and Tottenham, with the two sides playing out a highly-entertaining 2-2 draw with Higuain scoring a double.

However, it was his first effort that got everyone talking on social media, as he swivelled and produced a world class finish after just two minutes to give his side the lead. The night didn’t end well for the Argentine forward though, as his missed penalty could prove to be costly in the tie.

A dream start for Juventus, a nightmare start for Spurs…

Meanwhile, over in Basel, Man City were running riot as Pep Guardiola’s men will now take a commanding 4-0 lead back to the Etihad next month for the second leg.

Ilkay Gundogan deserves a mention for a wonderful strike of his own, but the man of the moment for the Premier League leaders right now is certainly Aguero as he continued his fine run of form with this stunning effort as he continues to just make it look so easy.

With Gabriel Jesus still out injured, Guardiola certainly won’t be missing the Brazilian ace if Aguero can continue bagging goals like this one…

Man City are three up inside the opening half hour against Basel.