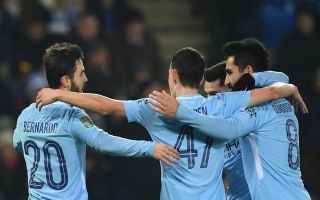 Man City fans were overjoyed with the performance of Bernardo Silva in their 4-0 win over Basel tonight in the Champions League round of 16.

The away side opened the scoring through a fine header from Ilkay Gundogan, with Silva then adding a second with a fantastically executed volley just minutes later to double their lead.

Aguero then put the result out of sight with fabulous 25-yard effort which sailed past the Basel ‘keeper, with German Gundogan then bagging his second and City’s fourth of the game just after half time with a fantastic curling effort.

After the match, City fans took to Twitter to heap praise on Portuguese international Bernardo Silva for his performance in their thrashing of Basel.

Here are a few select tweets from fans praising the midfielder for his performance this evening as his side all but booked their place in the next round of the competition.

Bernardo Silva is really showing his quality, always rated him.

I am now a believer. This is the game I see Bernardo Silva's importance and quality #MCFC #basmci

Bernardo Silva is WC. He was a sub. That’s depth and quality.

Bernardo Silva could be as good as David Silva he's brilliant