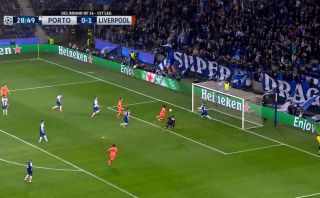 Mohamed Salah has joined an elite group of player after scoring his 30th goal of the season for Liverpool against Porto tonight.

In doing so, the prolific Egypt international, a summer signing from Roma and a former Chelsea reject, has become only the 13th player in the Reds’ entire history to reach the 30-goal mark, and he’s done it by February.

This is a quite incredible achievement by a player who doesn’t even play as an out-and-out striker, and who will no doubt have been written off by some in the Premier League after previously failing to make it at Chelsea.

In fairness to Salah, he rarely got much of a look-in during his brief stint at Stamford Bridge before being loaned out to Florentina and later Roma, whom he later joined on a permanent deal.

30 goals this season for Salah. pic.twitter.com/oiw0Ho0KE2

Mo Salah becomes only the 13th #LFC player to score 30 goals in a season. It’s mid-February.

Liverpool are now the winners as they lured him back to England this summer, and he’s surely performed well beyond everyone’s expectations with his stunning goal return.

This latest was hardly the pick of the bunch as he rather bundled it in, but he won’t care and neither will the travelling Liverpool fans who have seen their side go 2-0 up at half time in what looked like being a difficult first leg away from home against Porto.

If it stays like this Liverpool will be hugely confident of going through ahead of the second leg at Anfield, and it’s little surprise another Salah goal has played a key part in that.