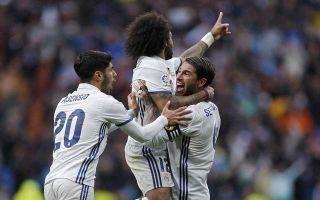 Fans took to social media after Real Madrid’s crucial 3-1 win over PSG in the Champions League this evening to praise star Marco Asensio for his performance in the victory.

PSG took the lead in the first half through Adrien Raboit after Brazilian Neymar, who has played against the Spanish giants on a number of occasions previous for their fierce rivals Barcelona, set the midfielder up with a deft little back-heel.

The home side then equalised thanks to a penalty from Cristiano Ronaldo, a strike that was the forward’s 100th in the Champions League for Madrid.

Ronaldo then bagged his second in the 83rd minute, with Asensio then providing his side’s third in the 86th minute as Marcelo swept home a cross from the Spaniard to wrap up the scoring.

Fans were very impressive with Asensio’s performance despite the fact the midfielder only came on in the 79th minute.

Here are a few select tweets from fans praising the Spaniard for his impressive cameo performance tonight.

He turned 22 less than a month ago. Simply a natural superstar. pic.twitter.com/KaVrWhCL8O

Marco Asensio did more in 10 minutes than Mbappe did the whole 90 mins.
Best young talent in the world for a reason!! OUR GOLDEN BOY ?? pic.twitter.com/EtXuy2J8ev

I never want to see Isco start again. Not even joking. Asensio was better on the weekend and today. Made an impact where it was needed most

Asensio was decisive, just a phenomenal cameo. He's a player born to change and win games. Never doubt the boy…

Asensio is different level. People rave of the Mbappe’s of this world, but that guy is going to undoubtedly be world class.

PSG were absolutely bossing the game before Asensio came in and change the dynamics of the game. Impact sub.

Asensio played less than 15 minutes and still performed and made a better impact than Neymar who played a whole 90 minutes.

His name is Asensio and he's kinda good