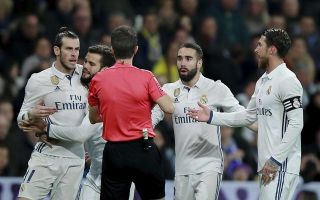 Real Madrid fans have taken to social media to vent their frustration with Zinedine Zidane’s choice to leave out Welshman Gareth Bale for their Champions League clash against PSG this evening.

Zidane has decided to leave out the Wales international out of his side’s starting eleven for their match at the Bernabeu today, with the Frenchman deciding to go with a front three of Cristiano Ronaldo, Karim Benzema and Isco instead.

According to reports in Diario Gol, this could now signal the end of Bale’s Los Blancos career, as the news outlet have reported that the player is not willing to sit on the bench now that he has returned to full fitness, and that he is ready to leave the club should he not play a part tonight.

Following the announcement of their side’s starting line-up, Los Blancos supporters took to Twitter to vent their annoyance at Bale’s exclusion from the starting line-up.

Here are a few select tweets from fans moaning the decision to leave Bale out of the starting line-up for tonight.

Guys see the lineup……….WE ARE LOSING THIS GAME!!

I can’t understand why Benzema starts over Bale

Sooo we gonna start Benzema over Bale who has been playing exceptional every time he has been on the pitch? Wow

Why would you choose Benzema over Gareth bale #RealPSG

Why start Benzema over Bale why why why

Bale has to leave Madrid, when your sub over Benzema it’s time to go #madrid #bale

Zidane starting Isco over Bale. He wants to lose.