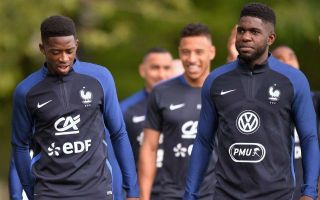 Barcelona forward Ousmane Dembele is reportedly keen on a transfer away from the club and regrets joining them amid rumours linking him as a target for Arsenal.

Diario Gol claim Dembele’s fellow Frenchman Karim Benzema has learned of the youngster’s desire to leave the Nou Camp after struggling to settle in both on and off the pitch.

The Spanish outlet claims the former Borussia Dortmund attacker does not get on with a number of big names at Barcelona, including star player Lionel Messi.

This comes as Don Balon also claim Arsenal are keen on Dembele after a tip off from his old Dortmund team-mate Pierre-Emerick Aubameyang, who moved to the Emirates Stadium this January.

That report stated Arsenal were only willing to pay around £53million for the 20-year-old, which may not be enough, but they may be pleased to learn the player himself is so keen on an exit from the Nou Camp.

Arsenal lost Alexis Sanchez this winter, and despite bringing in both Aubameyang and Henrikh Mkhitaryan, could surely still do with further reinforcements up front.

Theo Walcott and Olivier Giroud also both left the club in January and players such as Alex Iwobi and Alexandre Lacazette have not really looked up to the job this season.

Dembele may have struggled at Barca, but showed at Dortmund that he’s surely one of the most exciting young talents in the game at the moment.