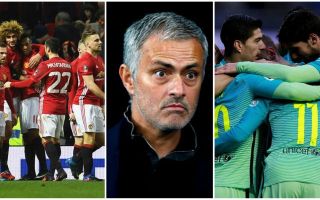 Man Utd are seemingly set to be very active this summer as speculation has already ramped up over possible comings and goings at Old Trafford.

With a gap to be bridged to rivals Man City, new recruits may well be needed at Old Trafford ahead of next season to ensure that they can challenge for the major trophies.

According to AS, that could start with a move for Barcelona midfielder Andre Gomes, who has struggled to establish himself at the Nou Camp since his move in 2016.

However, a fresh start with Man Utd under compatriot Jose Mourinho could be what he needs to get back on track after impressing for Valencia, and it is certainly an area that the Red Devils need to address.

With Michael Carrick set to retire at the end of the season coupled with the Daily Star reporting that Maroune Fellaini has supposedly reached an agreement with Besiktas, that could leave United short in midfield.

Fellaini’s exit will undoubtedly leave Mourinho furious, as the Portuguese tactician has made no secret of his desire to see the Belgian ace remain at Old Trafford having played a key role under him last season.

Unfortunately for him, based on the report above, it would seem as though he’s heading out the exit door when his contract expires at the end of the season.

Meanwhile, there seems to be a common theme when it comes to contract problems, as The Express claim that both Arsenal and Chelsea are lining up moves for Luke Shaw as he has yet to agree new terms with Man Utd.

Given how he has turned things round under Mourinho from last season as the United boss praised him last month and insisted he didn’t need another left-back, it will be a blow for the club to see the 22-year-old leave, and so they’ll seemingly have to step up contract efforts to avoid seeing him follow Fellaini’s lead and leave this summer.