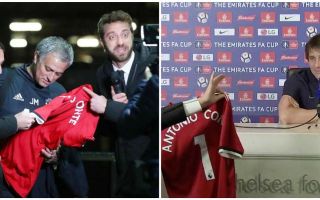 Chelsea boss Antonio Conte was on press conference duty on Thursday ahead of his side’s FA Cup clash with Hull City this weekend.

However, things didn’t stay on topic thanks to this Italian journalist who presented him with a Manchester United shirt with his name on it, which he claimed was a gift from Jose Mourinho, as per ESPN.

As seen below, it appears to be the work of comedians from Italian TV show Le Iene, who got Mourinho to sign the United shirt last month with Conte’s name written on the back.

Naturally, it appears to be part of an elaborate plan from them to prank the pair, who have been involved in an ongoing feud this season with Sky Sports detailing the back and forth between the two managers which has often got overly personal.

It’s reported by ESPN that the ‘comedian’ was escorted out of the press room after failing to give Conte his gift, and by the sounds of it, it was a pretty strange sequence of events.

After that distraction, the Italian tactician will undoubtedly be focusing on ensuring his side advance in the FA Cup this weekend and keep their hopes of winning silverware this season alive.

As for Mourinho and Conte, they’ll have a chance to exchange gifts in person later this month when Chelsea visit Old Trafford on February 25. Although based on some of the comments between them via the media this season, they may be keeping their distance.

Attention seekers at work – they got what they wanted.

Antonio Conte was presented with a special gift at his news conference today.