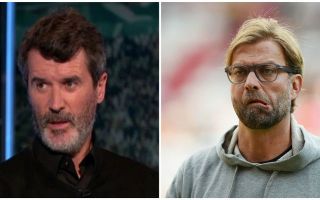 On a night where Liverpool secured a very impressive 5-0 win over Porto in the Champions League, Man Utd legend Roy Keane still found a way to criticise them.

The Reds swept aside their rivals in a top-class performance as they now look firmly on course for the quarter-finals, and many were rightly left praising them after the full-time whistle.

Not Keane though, as he couldn’t help himself and let his United side shine through as he still managed to find time to criticise Liverpool, and Tottenham, when discussing highlights of the games on ITV’s Champions League show.

“For a club the size of Liverpool and Tottenham, one trophy in ten years is I think pretty embarrassing,” he told ITV Sport, as seen below.

“Pretty Embarrassing” – Roy Keane doesn’t hold back with his verdict of @LFC and @SpursOfficial‘s lack of trophies in recent times pic.twitter.com/96qzeefKac

“These clubs with these squads should get to the knock-out stages of the Champions League and win an FA Cup or a League Cup as well. That should go hand in hand.”

In his defence, Keane has a point. Given the investment, expectations and quality at the two sides in question, their wait for a trophy is rightly unacceptable for some.

While both can argue that they’re moving in the right direction under Jurgen Klopp and Mauricio Pochettino to get back to a level where they can compete for major honours, it’s one thing being optimistic and hopeful and another actually lofting those piece of silverware in the air.

Keane’s timing is a little poor as he can be accused of simply being biased when he should have been praising a great performance, but in general terms, there’s a case to be made that he’s certainly not wrong.