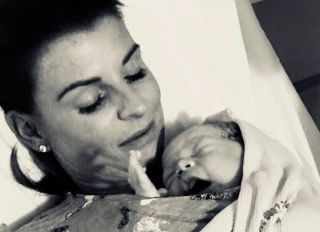 Everton star Wayne Rooney has had his fourth baby with wife Coleen introducing their newest son Cass in a touching Instagram post this afternoon.

The Rooneys will no doubt be delighted with the latest addition to their family, with Coleen writing that she was ‘So Happy to welcome our Baby Boy’, describing him as ‘healthy’ and ‘beautiful’.

Coleen’s post was met with plenty of heartfelt congratulations and best wishes from adoring fans, with Rooney retweeting it from his accounts and Everton’s official page also retweeting another post from Wayne.

The former England captain put together a great shot of him and his four sons as he anticipates a great five-a-side team of the future.

It’s been a happy season overall for Rooney, who returned to boyhood club Everton in the summer after a long and successful career at Manchester United.

The 32-year-old has recaptured some of his finest form since moving back to Goodison Park and can now add being a father once again to the list of things to be happy about this term.

The Rooneys’ latest child also sees them end their tradition of starting their names with ‘K’, with Cass differing from Kai, Klay and Kit in that respect.