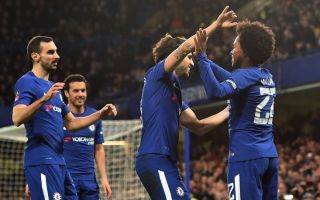 Chelsea cruised into the quarter-finals of the FA Cup on Friday night by dispatching Hull City at Stamford Bridge.

With Eden Hazard rested and left out of the squad completely, Willian and Cesc Fabregas each auditioned for the role of chief playmaker.

Willian’s case was strong from the outset as it took him just 106 seconds to open the scoring with a fine effort from long-range.

Fabregas then produced a fabulous first-time through pass to assist Pedro, who made it 2-0 on 27 minutes, but Willian was quickly back in the limelight as he drilled in his second goal of the night, via the post.

Emerson Palmieri claimed a debut assist as he set-up Olivier Giroud’s first Chelsea goal to see the hosts go in 4-0 up at half time.

Chelsea get a tad complacent at the start of the second period and Fabregas gave away a needless penalty with a lazy tackle.

Stand-in goalkeeper Willy Caballero will perhaps thank Fabregas for his rashness as it provided him with an opportunity to shine – a chance he claimed with both hands, which he used to palm away David Meyler’s firmly-hit spot-kick.

Willy Caballero – 7
Had very little to do for most of the game, which makes his fine diving penalty save all the most impressive.

Ethan Ampadu – 6
Incredibly calm and confident, despite being just 17 and this being only his fourth senior start for Chelsea. His super coolness almost got him in trouble on one occasion but he styled it out and did not look at all out of place.

Gary Cahill – 6
Took a arm in the face early on, but was steady throughout.

Antonio Rudiger – 7
A dynamic display from the German international.

Cesc Fabregas – 6
Played a superb pass for Pedro’s goal, but gave away a penalty due to a lapse of concentration. It didn’t matter tonight but mistakes like that cannot be afforded against Barcelona next week. Replaced by Kyle Scott (5) on 62 minutes.

Danny Drinkwater – 7
Won’t make any headlines but performed a very useful role. His discipline allowed Fabregas and those further forward the freedom to inflict damage.

Emerson Palmieri – 7
Reasonable debut. Looked more inclined to run with the ball than Marcos Alonso. Made a couple of impressive interceptions and instigated multiple counter-attacks.

Davide Zappacosta – 6
Looks much happier on the right after being shoehorned in at left wing-back recently.

Olivier Giroud – 7.5
Held the ball up well, showed some tidy touches and took his goal very well. Giroud is the sort of striker that creative attacking midfielders just love playing with and he arguably adds much more value to the side than Alvaro Morata (5), who came on for the final 20 minutes.

Pedro – 7
Taken off at half time, but looked sharp in the opening 45 minutes. Replaced by Callum Hudson-Odoi (6).

Willian – 9
Wonderful individual display that Hazard would have been proud off.

Willian is class why isn’t he a Conte regular…

Willian Having The Best Game Ever!

Willian has been excellent, as always.

Conte must play willian and Hazard together on tuesday.

Willian. Still one of my favourite players in Chelsea. Oozes class. Grit and finesse.

Just saw willian’s second goal from a different angle. He better start over pedro against Barcelona

Willian deserves a place in the first eleven against Barcelona. He’s been superb

Willian deserves a place in the first eleven against Barcelona. He’s been superb