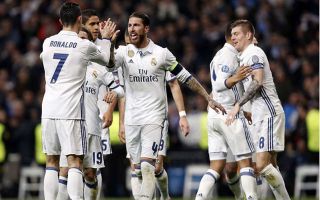 Real Madrid will take a 3-1 lead into the second leg of their last-16 Champions League tie with Paris Saint-Germain, and Cristiano Ronaldo wants a big call to be made.

After falling behind to Adrien Rabiot’s goal, the reigning European champions fought back and secured a win through a double from the Portuguese superstar along with a strike from Marcelo.

However, they were arguably fortunate to come away with such a strong lead as PSG did cause them problems throughout the game and will be disappointed to be two goals behind in the tie.

According to Don Balon, as re-reported by The Express, Ronaldo believes that Zinedine Zidane has to make a pivotal decision in the return fixture in Paris, and that involves dropping Karim Benzema to the bench.

On one hand, perhaps the shock element of this report is that the pair have been teammates for so long and have been so successful together, it’s a surprise to see Ronaldo reportedly make such a demand.

However, there is plenty of sense behind it which actually makes this the right call for Real Madrid.

Benzema has scored just six goals in 26 appearances so far this season and so evidently he’s not in great form in front of goal.

Further, it’s suggested by Don Balon that with him out of the team, Madrid can adopt a more defensively sound system, and bring in Gareth Bale.

That’s another key factor in this potential decision, as the Welshman’s pace and threat on the counter attack perhaps make him perfect for this type of game. The Spanish giants can soak up all the pressure and hit PSG on the counter to try and catch them in a vulnerable situation.

It seems strange to hear that such player power could determine a decision, but there is a strong argument to suggest that it’s one that Zidane should come to himself anyway.