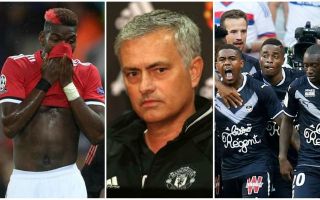 Man Utd are facing a barrage of exciting transfer speculation, but there is one worrying part of the rumours regarding Paul Pogba’s future.

It had been claimed that Real Madrid were lining up a whopping £120m bid for the Frenchman amid reports of issues between him and Jose Mourinho.

However, as per The Telegraph, it’s suggested that Pogba isn’t ready to quit on the Red Devils and move on already and he will work things out at Old Trafford to secure his future with Man Utd.

He’s had his struggles since returning to Manchester, but there’s no denying that it would be a huge blow and disappointment for United fans if he were to leave in the near future.

Meanwhile, The Express claim that Man Utd have been installed as favourites to land Real Madrid midfielder Luka Modric.

The midfield maestro is a joy to watch as he pulls the strings for the Spanish giants, but as per BetStars, they have made Man Utd joint favourites along with Tottenham to sign the Croatian stalwart this summer.

With Madrid struggling this season and suggestions of an overhaul being touted, it remains to be seen whether or not he becomes available, with a whole host of clubs surely set to be keen.

Elsewhere, Malcom has confirmed that Bordeaux will allow him to leave this summer, and that will reportedly alert United, Arsenal and Tottenham in what could be a three-way Premier League scrap, according to the Metro.

It’s added that the 20-year-old could cost over £40m to prise away from the French outfit, and so it remains to be seen whether or not those demands can be met by Man Utd.